At the end of November, Mrudhula (my girlfriend) and I decided to go to Poetry Night at Stammen Café. We were pretty tired, but I told my girlfriend earlier that week that we should push ourselves sometimes to go out. It’s the only way to have a bit of a social life.

Mrudhula and I both like to dabble a bit in poetry. I believe my ‘poems’ look more like stories and rhymes than they look like poetry, but I try my best. Mrudhula’s work resembles classic poetry better and are really beautiful and raw in my opinion. You can find her poems here. I will post two of mine in this blogpost. They are the ones I recited on stage that night.

I really wasn’t planning to recite any of them at all that evening to be honest, but I had sent two of my poems from my laptop to my phone, just in case. They were the rhymes that felt the most finished to me. I was planning to memorize them, but it wouldn’t be necessary for that night I thought. Surely it would be very busy at the café and there would be a lot of people raring to go and share their poetry on stage. I imagined there would definitely be a waiting list and there wouldn’t be any chance to read my poems anyway. I couldn’t be more wrong. 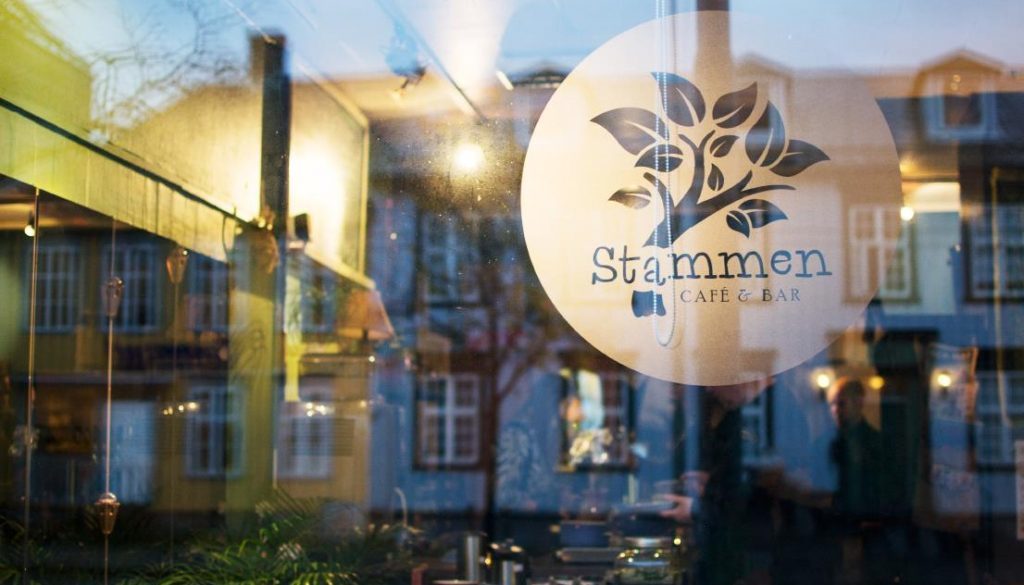 When we arrived at Stammen, there were only five or six people sitting in the warm, cozy café. A really friendly woman named Olga, who hosted the poetry night, greeted us. I was amazed that it was such an intimate, interactive event. I really like Stammen café and the personal, friendly feeling you get when you walk in. It feels more like a living room than a café. They also serve nice organic drinks and snacks.

Steadily more people found their way into the café and I began to feel a bit at ease when Olga started to recite a few poems on stage. After reading the third poem out loud though, she suddenly announced it was our turn now. 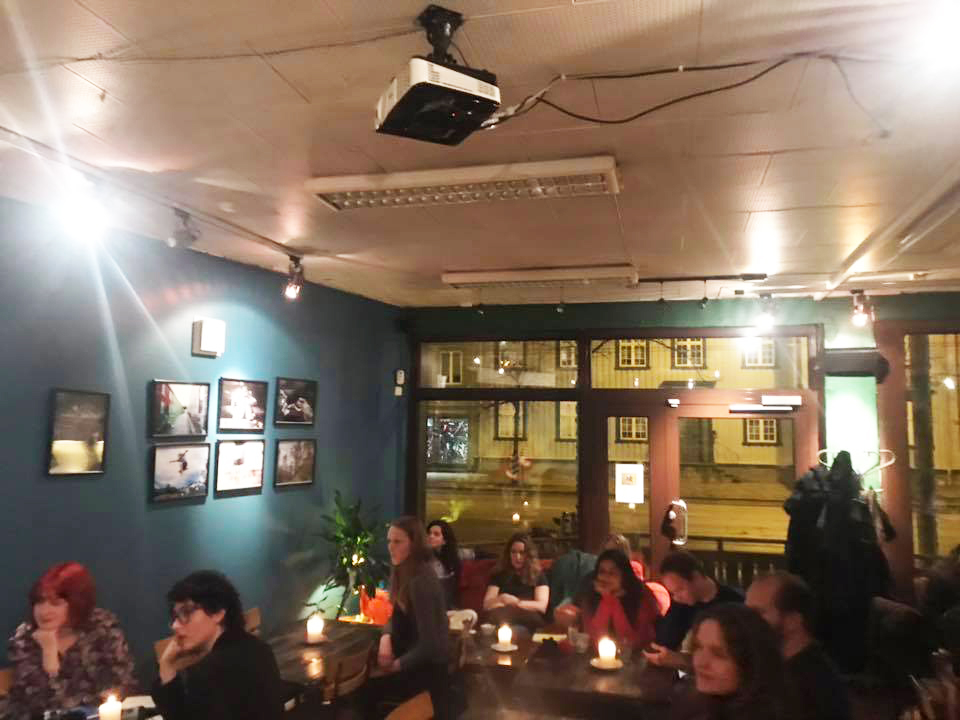 Surprisingly, nobody really wanted to go on stage, me included of course. It seemed that even the people who she announced were regulars, still had a bit of stage fright. Luckily there were a few brave souls who overcame their fears and recited some short poems on stage. After three or four people performed some short poems, it took longer and longer for people to volunteer. Each time Olga asked if there were any volunteers, minutes went by that felt like ages to me. She announced that if nobody stepped up, the poetry night would end for the evening. It felt like this was my time to step up and I raised my hand.

I made my way to stage while my heart was pounding louder and faster in my chest. As I took the microphone, I felt like a noose was tied tightly around my throat. With shaking, ice cold hands, I took my phone out of my pocket and started to read my poem ‘Radio Gaga’ on autopilot, not daring to look at the audience. I only came back to life a bit when I sat back down. I hoped people understood what my poem was really about and they didn’t just zone out like I did. 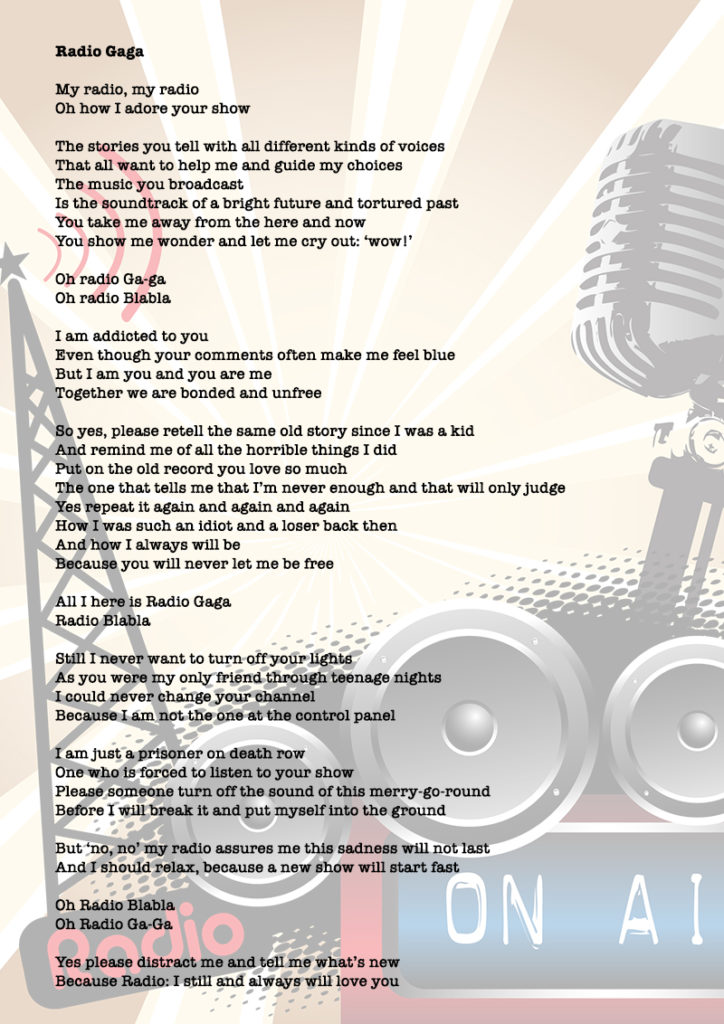 The girl that went on stage right after me recited a great poem about ‘fear’ she wrote herself, which perfectly described how I felt just a few seconds ago on that same stage. She was the real hero that night in my opinion; after her performance a few others found their courage and sought the spotlight. About an hour into the night, Olga announced that the time had come for the last poem.

This triggered a few poets to suddenly put up their hand. It was their last chance to do what they came for, and mine too. Mrudhula asked me if I wanted to recite the other poem I had prepared, but I hesitated. It was the poem I wrote for her and recited to her on our third date. After a man recited a really nice but very intense and dark poem, I couldn’t let that one be the last of the night and decided to recite my poem ‘The eyes of my queen’ to the audience. 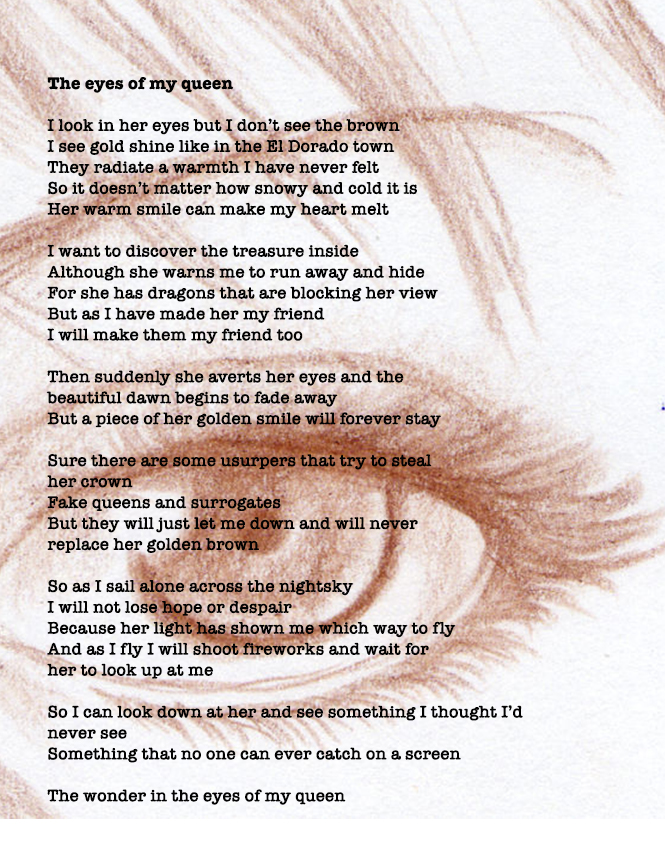 This time I felt more confident and I actually made eye contact with the crowd. I felt people liked this poem more than my previous one. After I sat down I felt I achieved what I really wanted: to conquer my fear and speak to the audience with confidence. While we were waiting for the bus home, I got a few compliment about my poems and I was even asked to sing a song on stage with two people we just met. As almost everybody left and I felt more confident than I had felt in a long time, I thought ‘what the hell’ and just went for it. It was a great night for my self-esteem and just a great night in Trondheim. 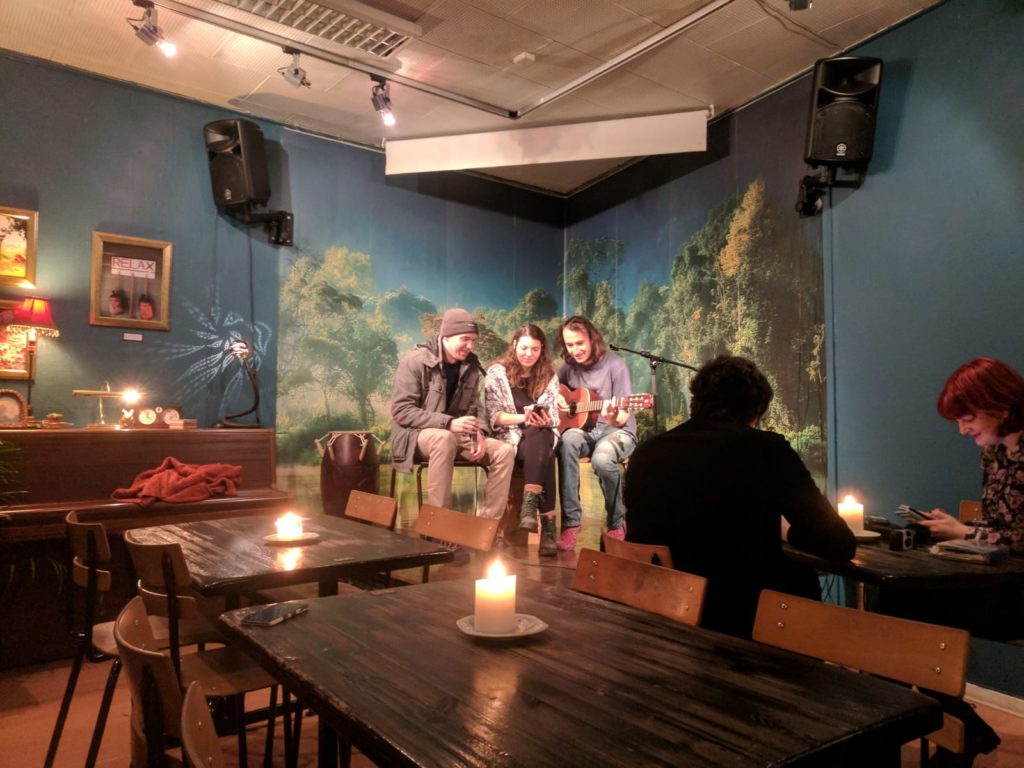